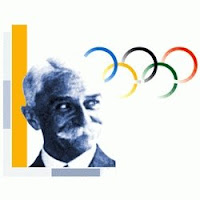 In the next few weeks the world will be transfixed by the 2012 London Olympics so it’s an appropriate time to reflect on the vision of Baron Pierre de Coubertin, the founder of the modern Olympics.

De Coubertin believed that a country can only truly call itself sporting when the majority of its people participate in some sporting activity. Ireland likes to view itself as a ‘sporting nation’, but the majority of our population is sedentary. It’s clear that we need some new thinking about physical activity programmes for children if we are to arrest the spiral of modern lifestyle-related illnesses.

The ancient Greeks understood the concept of sound body, sound mind and that’s why they built their gymnasiums alongside their schools. De Coubertin looked to the Greeks for inspiration and he also argued that sport is a potential source for inner improvement.

His message was simple and pure – “all sports for all people” – and with the London Olympics on our doorstep, we should consider how we can apply de Coubertin’s philosophy to 21st century Ireland.

We need to ask ourselves why, in the middle of an unprecedented running boom, childhood obesity has reached epidemic levels? As a society are we happy to have ‘elite’ groups of physically fit people while the majority miss out on the benefits of regular exercise?

Any attempt to create a genuine exercise culture must begin in our schools. We need to create fun-filled, non-competitive physical activity programmes. The emphasis should be on creative playfulness and we should remove the over-structured, over-coached sporting regimes that currently dominate in our schools.

As it is we are producing capable athletes, but very few with the flair of athletes like Usain Bolt or Haile Gebrselassie who exude a passion and creative joy in their sport.

They could look to the ‘Spark’ programme in Chicago’s high schools where all pupils participate in aerobic exercise at the start of each school day. This programme has been proven to improve academic performance as well as the physical health of participants.

Ireland has always been able to produce world class sportspeople like Sonia O’Sullivan, Eamonn Coghlan, Katie Taylor and Rory McIlroy, but in all honesty they developed themselves.

If we are to achieve lasting change for our children, we need to adapt de Coubertin’s philosophy of ‘all sports for all people’. Only then can we truly call ourselves a sporting nation.