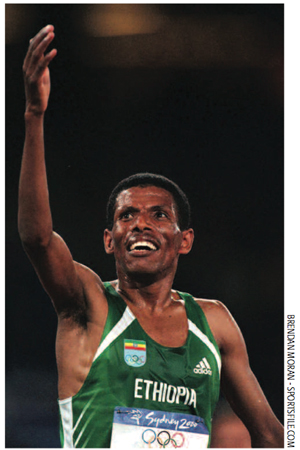 Distance running can be a blissful experience once you have mastered the discipline required, writes Peter Maher (Irish Runner June/July 2010).

Some runners become so preoccupied with performance, times and niggling injuries that they fail to fully savour the sheer joy of running: that sense of oneness with body, mind and spirit that comes with the natural rhythm of your heaving diaphragm.

Too often, the runner’s attention is drawn like a magnet to the blisters, the stitch, the lactic acid – to name but a few – that are routine to the distance runner’s body. We develop fear and we even dread the run. It’s love, it’s hate all wrapped in one.

Instead, the runner needs to develop a healthy awareness of what is happening in the body and mind while we run. For the ideal, study the floating bliss of Gebrsalassie, he of the permanent smile as he runs 2:03:58. To me it is no co-incidence that he runs so fast and for so long, for he surely has mastered what the inside job is all about – discipline. To win your battle with the marathon, you need discipline in spades. The discipline to tackle long runs in inclement weather, and the discipline to fight the daily battle against the lure of the easy life.

As this war rages, it’s not really against others, or the weather, or the big hills; the runner’s fiercest battle is against his or her mind. Every morning, the mind has a simple teasing question that goes right to the pit of your stomach: are you a champ or a wimp today? The image of the scrawny, sinewy distance runner does not easily lend itself to that of a warrior, yet in mastering the discipline factor one achieves something heroic.

The willpower battle experienced by the modern distance runner in a very real sense mirrors the experience of our primal ancestors. There are no more lions, tigers and reptiles to attack us today unless you venture alone into the wildlife reservations of Africa or Asia. But we are all in a battle with the predators of stress, coronary heart disease, obesity, cancer, depression and the list goes on.

Study after study concludes that by emulating the instinctive survival act of flight, we stimulate the natural response factors of health and vitality in the body. (The other natural response factor, fight, is not politically correct in the modern workplace so we will leave that alone for another day.) In our complex world of high-tech living, self preservation is under constant threat. Primitive man could see and more importantly was aware of his predatory foes. The aforementioned modern predators, though, creep up on up on you silently. The antidote to these predators is developing the discipline to eat right, to drink clean water, to breathe fresh air, to smell the wonders of nature, to stretch when stiff, sweat a little, and sleep when tired. The healthy, sound mind and body that follows on from this discipline will enable you to tackle your marathon.

When Steve Jones broke the world marathon record in 1984 and was asked what his thought process was while breaking the record, he replied: “I don’t know about psychology; I’m a runner.” It was a simple answer from an athlete who epitomised true discipline of body of mind. Jones didn’t have the formal psychological terminology for his strategy, but he was a real Zen running master.

So as we go forward in the daily challenge to overcome our fears of running the marathon, we must recognise the powerful role discipline plays in defeating doubt and weakness. The dreaded hilly “twenty miler” or marathon that looms next Sunday is a challenge laden with the prospect of mind body warfare. The demands of pace control, glycogen storage, hydration, and mental fortitude represent a ‘war’ you can win if you have won your own private battle in training.

Discipline is all: master it and distance running will begin to reveal its sweet mysteries to you.